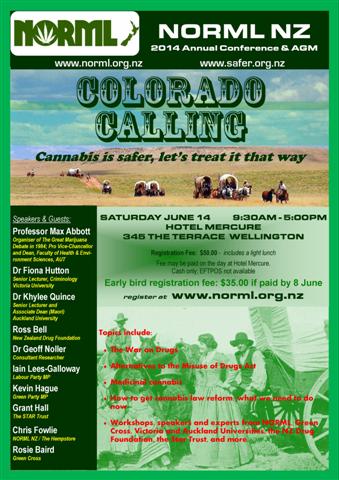 This plan builds upon the 2012 and 2013-14 plans, as well as recent advancements in the cannabis debate here in New Zealand and successful initiatives in Colorado, Washington and Uruguay.

Cannabis is safer than alcohol, or synthetics, and should be treated that way. Our overall goal is to legalise the responsible use of cannabis by adults. Our three core policies, adopted in 2011, are:

NORML campaigns for the removal of all penalties, the right to grow your own, and some form of regulated market. With recent advancements in the United States and Uruguay, and New Zealand’s own experience with the Psychoactive Substances Act 2013, the Law Commission’s 2011 recommendations seem to be too conservative.

To help advance the debate, we should propose a specific model based either on Colorado’s “regulated private enterprise” law, or Washington’s “state-run marketplace”, or Uruguay’s “government-grown or social club” approach.

The unique opportunity for New Zealand cannabis law reform is that synthetic cannabis products will be back in stores within 2-3 years. Many people realise the only way it can be stopped is by allowing the real thing. This also puts a timeframe on our campaign. It means cannabis can’t be buried in another inquiry, and we can’t wait for UN drug treaties to be reviewed. While we must take care not to encourage anti-drug hysteria, we should capitalise on the growing public feeling that natural cannabis is safer. We are also mindful this is an election year and we will have a new Parliament to deal with.

In order to pass legislation we need the support ( in a “conscience vote” in Parliament) of at least 61 MPs, who in turn need the support of their voters, the media and other influencers. We will: