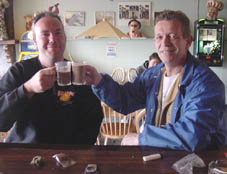 Just ten minutes by train from Amsterdam, the quiet town of Haarlem is providing a model example to the rest of the world of how coffeeshops can best be run.

Nol van Schaik runs Haarlem’s three Willie Wortel coffeeshops and Maruska der Blaauw the Global Hemp Museum. Together with Wernard Brunning, who opened the very first coffeeshop in 1972, they have started a coffeeshop training course. As soon as I heard, I knew I had to go.

The Coffeeshop College “cannabizness” course aims to export the successful Dutch coffeeshop model around the world. It was started after Nol co-founded the Dutch Experience coffeeshop in Stockport UK with medical marijuana advocate Colin Davies and sparked huge interest all around the world.

Courses are scheduled for the last week of each month, but this time I was the only student to turn up which meant I had personal one-on-one tuition and the opportunity to structure classes to teach me exactly what I needed to know.

First came the theory and the development of the Dutch policy. There is a common perception that the Dutch Government must have thought of the idea but actually the first moves were from brave and principled people acting in defiance of the law.

The Lowland Seed Company started it all in 1969 when they sold and gave away thousands of cannabis seedlings from a barge near the centre of Amsterdam, in order to convince people to grow their own.

Then in 1972, Wernard and his friends opened the Mellow Yellow, with one house dealer sitting in front of the bar like a customer. Less than ten grams in pre-bagged deals was kept in an old jacket hanging on the wall and nearby a sign read “The management is not responsible for people’s belongings left on the premises”. If the jacket was ever found it had nothing to do with the cafe and there was nothing the police could do.

After five attempts the police gave up raiding the Mellow Yellow and it was followed by the Bulldog, the Milkyweg and others. Eventually the government, police and health authorities all agreed that the coffeeshops were a good thing, and formalised the tolerance policy with licenses, regulations and regular inspections. The point is that if the Dutch pot pioneers had waited for coffeeshops to happen, they may still have been waiting.

Dutch cannabis policy was designed primarily to separate the markets for pot and hard drugs and best protect young people. The Mayor sets the rules and so they vary slightly in each municipality. Haarlem’s 16 cannabis cafes have worked closely with the council and the police and their AHOYG rules have since been widely copied by other municipalities: The A is for no Alcohol, H for no Hard drugs, O means no Overlast or nuisance, Y is no Youth, meaning those under 18 (it used to be 16, and now those youth who are potentially the most vulnerable in society go to criminals to get their cannabis), and the G is for the Gram limit. Coffeeshops are supposed to hold no more than 500 grams in total and limit individual sales to less than 5 grams.

Amsterdam gives coffeeshops the option of selling alcohol if they want, while Haarlem, like most towns, does not. Amsterdam also has a policy of wanting to reduce the number of coffeeshops over time by revoking their permits for even the tiniest infraction. This certainly keeps the coffeeshops on their toes and following the rules. If the rules are not followed, the coffeeshops are given yellow cards like in football. Finding an underage person on the premises brings one card, and possibly being forced to close for a week, while hard drugs will attract three cards and instant closure.

One of the oddest aspects of the Dutch tolerance policy is that it does not apply to commercial growers. Coffeeshops can sell out the front door, but there is no lawful way for them to get supplies in the back door. Seeds are legal, and so the coffeeshops work with the grow stores to develop ‘grow circles’, where home growers share tips and expertise and coordinate their grow cycles and varieties so the coffeeshop is kept in a constant supply. All this must be done in secret just like in New Zealand, although the grow stores are very social places and there’s no pretending that all the gear is for tomatoes.

After the theory we got on with the practical. Lessons in judging and inspecting cannabis were done with the help of a loupé and digital microscope, and a smoke or two. It was fascinating to compare Nepalese temple balls with Maroccan hash and local keif, and to see the increased trichome density in a sativa haze compared to an indica skunk. I was taught a battery of tests for judging the quality of hash, none of which involved actually smoking it.

Then we covered the practical aspects of running a cafe and bar, with job schedules, storage control, hygiene, and guidelines for staff and management. I did two practical shifts, one behind the coffee bar and the other in the dealer’s booth.

It was a wonderful experience to legally sell the world’s finest marijuana and hash to more than fifty consenting adults. Willie Wortels sells 13 types of grass (most popular: Power Plant and Sage), 10 types of hash and 9 types of machine-rolled joints. The grass is mostly locally grown Nederweit while the hash is mostly imported from the far corners of the world, although locals are increasingly making water hash and compressed “polm” from their crystal-coated bud trimmings.

Dutch coffeeshops have protected the health of their customers by ensuring only quality (mostly organic) produce are sold. All coffeeshops want a good reputation and they cannot get away with selling inferior hash or marijuana because their customers will come back and complain, unlike with an illegal dealer.

Willie Wortel’s participates in the Medi Weit programme that offers half price cannabis to medical users. Growers are also encouraged to donate 10% of their crop or even just the leaves to be pollinated or made into canna-chocolate. About 400 Dutch pharmacies also sell medical marijuana provided by the company Maripharm.

On a field trip to the Interpolm grow store in Haarlem we found a group of growers sharing stories around a Pollinator machine. This Dutch invention is a silk-screen drum that you fill with marijuana and as it spins the THC-containing trichomes fall through the screen to be collected underneath. A thick layer lined the tray and to my delight I was given a big bag to try. It doesn’t get much better – or healthier – than smoking pure trichomes with absolutely no plant matter. They can even be added to your bedtime cocoa or sprinkled on your cornflakes.

I had earlier met the inventor of the Pollinator, Mila, in Amsterdam. She showed me a ten foot-long model called the Pollinator Forever (“you shovel, it tumbles”) which some German researchers had ordered. The German government allowed them to work with THC for the medical research they were conducting, but would not let them import it or grow any plants to get it. They had worked out a way of turning CBD, which still occurs in low-THC hemp, into THC. They needed a lot, so they had ordered the biggest Pollinator in order to process a field of hemp into the THC they wanted. Just like the pot smokers, scientists too must find devious ways to get around the absurd prohibition on cannabis.

Our field trip continued to Amsterdam, where I put my new knowledge to use evaluating the coffeeshops. We also happened to meet the inventor of the joint rolling machine, which churns out 120 conical joints in 20 minutes with no saliva, a minimum of paper and the option of your store logo printed on them. It’s just so civilised here.

Finally the end of the week came and it was time to sit the test. I passed with 93% correct, which was the highest score so far and probably makes me the most suitably qualified person to start a coffeeshop in New Zealand.

NEXT: I decided to celebrate the occasion with a trip to Dordrect for the annual Weed Cup. >>

More Photos of the Wilie Wortel Coffeeshop in Haarlem