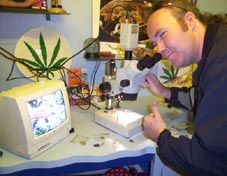 Drug policy has little if any impact on whether people choose to use drugs or not, but it does effect how much harm an individual and their community is exposed to. The Government claims the current policy is one of “harm minimisation”, yet criminalisation does not stop people using cannabis, it fails to prevent harms that may be associated with it’s use, and it creates more problems than it prevents. The Government spends over $50 million per year criminalising more than ten thousand mostly young people for a herb that is normal to use and proven to be less harmful than alcohol or tobacco. Prohibiting such a popular and benign past-time forces cannabis buyers to score from criminals, which fuels organised crime and official corruption, creates disrespect for the law, and in turn undermines drug education and prevention efforts.

The American alcohol prohibition of the 1900s was repealed after a campaign by Mothers Against Prohibition, who said “Save Our Children: End Prohibition”. This “noble experiment” that had attempted to ban alcohol – which is, like cannabis, a socially acceptable and widely used drug – had only created powerful mobsters who engaged in open warfare with police and used children in their distribution chain as well as their customer base. Prohibition failed to reduce alcohol use, but did increase the harm to users who were forced to fraternise with criminals and drink poisonous “moonshine” alcohol.

We can see the same situation in New Zealand today. Cannabis prohibition has created mobsters who will sell cannabis of unknown safety and purity to anyone, regardless of age. Rather than controlling cannabis, prohibition removes all control and places it in the hands of those prepared to break the law. Cannabis prohibition has also failed to reduce use, with half the country prepared to admit they have tried cannabis. Few people today would agree that anyone should be arrested for smoking a joint.

Having now passed the coffeeshop training course and investigated cannabis policies in North America and Europe, it is apparent that in contrast to the lack of control prohibition has given us, society can have the most control over the way cannabis is used by regulating and licensing outlets in a similar way to how we regulate the sale of alcohol and tobacco.

I believe it is only a matter of time before coffeeshops are open in New Zealand. However, every jurisdiction that now has a progressive drug policy, has that as a result of dedicated and principled people putting ideas into action, rather than the pipe dream of governments one day coming to their senses and ending the war on drug users.

I have said I intend to open a coffeeshop when I return to New Zealand later this year, but I am not seeking a confrontation. I would like to work with the authorities and will apply to the government for a license. The Misuse of Drugs Act allows licenses for the consumption of a controlled drug to be issued for the purposes of “research or study”. I agree that researching the effects of our drug policy is absolutely essential. It is a shameful indictment that we have tolerated cannabis prohibition for sixty years and it has never been researched properly, even though it is obvious to all that prohibition has failed. We should at least trial a coffeeshop – using the proven Dutch rules – and study whether such a system of controlled availability is an improvement over attempting to drive cannabis underground.

Having coffeeshops will allow consumers of cannabis to be educated about responsible cannabis use in a non-threatening environment. Coffeeshops will separate hundreds of thousands of cannabis buyers from unscrupulous hard drug sellers, will and make it difficult for teenagers to access cannabis, unlike the current situation. Allowing coffeeshops will improve community respect for the police and the law, and will allow both the harmful and therapeutic effects of cannabis to be discussed openly. Opening coffeeshops could save the taxpayer around NZ$50 million per year in law enforcement costs, and generate significant taxation revenues that could be dedicated to drug education, prevention and rehabilitation efforts. Licensing cannabis cafes will send the message that society can deal with widely used and socially acceptable drugs in a way that is consistent, rational and evidence-based.

I am confident that like in the Netherlands, Canada and the United Kingdom, once the first coffeeshop is open it will become obvious that cannabis prohibition has been a dreadful mistake. Or is that what some people are afraid of?

Chris Fowlie can be contacted at here or leave a message at The Hempstore.

Check these links for more information: