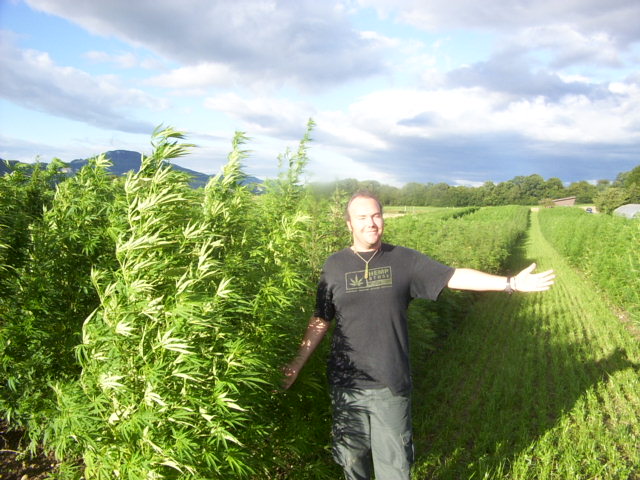 In 2002 Chris Fowlie toured Europe where he researched cannabis policies and cultural practices. This article examines Switzerland, which is set to become the country with the world’s most progressive drug policy.

While Switzerland leads Europe in reforming its drug laws and rolling back prohibition, back in New Zealand the new government has said it will maintain the same failed policy for at least another three years. Europeans can walk into stores and purchase their cannabis, but New Zealanders are considered by their government to be too stupid or inferior to have this level of freedom.

There are now well over 400 stores selling high-THC cannabis in Switzerland, officially for any reason other than smoking it, plus another 300-odd hemp farmers, processors and hash makers. Their fine produce keeps not only the locals happy, but also thousands of hemp enthusiasts from neighbouring Germany, France and Italy who cross the border in search of the legendary Swiss mountain high.

To get the low-down on how this situation came about, I visited the industry lobby group, Swiss Hemp Coordination (SHK), which also conveniently shares offices with CannaTrade and Swiss Hemp Times in Bern.

Roman of SHK told me there had been a long tradition of growing hemp in the Alps, but by the beginning of the 20th century there was little market for hemp and farming it there had largely stopped. In 1951 the Swiss introduced their first anti-drug laws following substantial post-war pressure from America. Smoking cannabis was forbidden just like in the rest of the world, although it was not made a punishable offence until 1971.

Things stayed much this way until 1993, when a legal advocate examined the drug laws and discovered that the prohibition on cannabis only applied to smoking it, and not to cultivating or possessing it. He advertised in some farmer’s journals seeking people to grow hemp for him. Eighty-five contacted him and in 1994 they grew 0.5-1 hectare each. The police looked at these fields of cannabis with interest, but they did not know what to do with it. Unfortunately, the legal advocate and the farmers also did not know what to do with it, and when harvest time came the advocate left the farmers to deal with it alone. About 60% of the crop rotted in the field, and many farmers lost money.

In 1995 some farmers continued to grow hemp and learnt how to process it. The first hemp stores also opened in this year, selling high-THC hemp flowers (buds) for example in aroma bags to put near your undies to make them smell nice, or to put in the bath, or just to look at. By 1997 there were hundreds of hemp stores all over Switzerland and some were so busy there were queues out the door.

Like everywhere else in the world, there is a huge demand for cannabis in Switzerland, but the difference here is that the government understands that punitive sanctions and harsh laws are pointless. This current trade is not considered problematic by anyone, other than that it is not technically legal, so the government decided to change the drug laws, not to try to get rid of the hemp outlets, but in order to control them.

The current situation is one of virtually no rules other than the prohibition on smoking cannabis. Outlets do not have clear rules and regulations to follow, and could be raided at any time. Shortly before I visited in early August, police had closed six stores in Zürich and another two in Bern. The police raids are more for show than effect, as other stores will soon open to replace them.

Every store I visited was full of customers and doing a brisk trade. The quality of the Swiss hemp was generally very good, with many Dutch strains available as well as lots of exciting local ones to sample. The prices were the cheapest I found in Europe, with a gram retailing for about 3-4 euros or half what you would pay in Amsterdam. In contrast to the Netherlands, most of the Swiss cannabis is grown outdoors, which made a really nice change for me as I prefer soaring outdoor Sativas to the heavy indica stone. A substantial amount is also grown in greenhouses, with the smallest proportion grown under lights.

There are other differences with the Dutch approach. Although there are many outlets to buy your hemp, there are very few places to smoke it, because it is the act of smoking that is the illegal part. Space cakes and cookies are still illegal, and it is also hard to find hash in the stores. Even the stores themselves can be hard to find, with many having no signage or just a hemp leaf sticker in the window.

In Bern I purchased an 8 gram greenhouse-grown Mango Bud that was sold just for sniffing, and then went across the road to buy some White Widow which was labelled that it was only to be put in the bath. I thought that would be a waste of a fine bud and smoked it instead, and it was only at that point that any law was broken.

The Swiss border towns have the busiest stores as many customers are from other countries. For instance, hemp stores in Geneva are frequented by the French, while the southern region of Ticino has many Italian visitors who have absolutely no interest in the mountains. The northern city of Basel straddles the German border and has about 70 stores selling hemp. It would be physically impossible for the German authorities to stop the flow of Swiss cannabis into their borders, as all people have to do is jump on the tram or even walk over the border.

The Swiss Government would like to make cannabis legal but that is against the 1961 international drug control treaty which they had signed, so they have come up with a solution that looks set to take them even further than the Netherlands. The Dutch tolerance policy came from the judicial system who did not want to prosecute people, but in Switzerland the tolerance policy is coming from the government and parliament. If we can say that the Netherlands turns a blind eye to their coffeeshops, the Swiss will be keeping their eyes open.

The new law will comply with international treaties by banning the cultivation, sale and possession of cannabis and cannabis seeds. Certainly on the face of it, this does sound much worse, however the regulations attached to the deliberately vague federal law will allow each canton to not punish people if they follow certain rules, for example, no exporting, no sales to minors and no advertising. This so-called “principle of opportunity” is a core part of the Swiss constitution which allows each local canton to interpret and apply federal regulations as it sees fit. Cantons have their own rights and substantial space to interpret the law. More conservative areas could decide to not allow even low-THC hemp sales, while areas with more liberal attitudes could license high-THC hemp sales subject to their own regulations. For instance, cantons could specify that hemp farms must be below a certain size, or not within 10km of a school, or whatever else they decided. Biel (near Bern) and Basel (near the German border) already have coffeeshops and these will probably be licensed legally.

The government’s bill will be voted on by the National Council, and if approved it will take effect in March 2003. It has already passed the more conservative Canton’s Council so the chances of it passing the bigger chamber are good. However if any changes are made to the draft bill by the National Council in September, the law will have to go back to the other two chambers and will not take effect in March.

This could be a real problem, because even more important for the government than the hemp laws are the heroin laws. The Swiss have a very progressive policy for opiate users which includes pure heroin on prescription, methadone programmes and clean injecting rooms, but this policy is only legal under an emergency temporary law that runs out in 2004. Because of this, there is substantial pressure to not make any changes to the draft law so that it can take effect before the temporary law runs out.

If that does happen the Swiss will be the only country in the world where cannabis sales will be regulated and controlled by law, and from that we could undoubtedly learn a lot.

At home on the hemp farm

I had the pleasure of visiting a Swiss hemp farm near Bern. Ten thousand plants of Dutch and Swiss origin lay unfenced near a main road. The farmer told me he started by planting cuttings directly into the ground. This had two problems: getting enough cuttings ready all at the same time meant creating a large grow-room, and if you’re going to do that then you may as well continue growing under lights; and secondly the unseeded nature of the crop attracted thieves who stole substantial numbers of plants. He now just throws seeds over the ground and rips out the male plants as they appear. He can’t keep up with all the males, so the buds get seeded but only lightly. This is enough to deter any thieves, but it also means he can’t sell the seeded buds as they are.

Instead, he designed and built a hash-making machine, which is basically a rotating silk-screen drum about 1.5m diameter by 2.5m length. Inside the drum are fins to carry the plant material to the top of the drum as it tumbles. The silk screen is just the right size to let the THC-laden trichomes (or “crystals”) through, leaving the plant material behind. The machine will turn 40kg of cannabis plant into 2-4kg of hash in under an hour. This is completely legal as long as none of it is smoked, so to satisfy the authorities that his hemp is not actually for smoking, he also built a seed cleaning machine and an essential oil extractor.

This year’s European summer has been very wet, and when we visited it was following yet more rain, which had a disastrous effect on the hemp crop. Many of the plants were infected with a mould which was quickly spreading in the damp conditions. The weather was forecast to clear for the next week so a decision was made to wait for the sunshine then harvest the crop early, remove the mouldy parts and make hash from what was available.

I was told that the past three summers have been similar, with conditions too wet for the hemp blossoms to mature without getting mould or fungus. If this weather continues, Swiss hemp farming could be forced indoors and out of the mountains.

Next: uber hanf in Germany