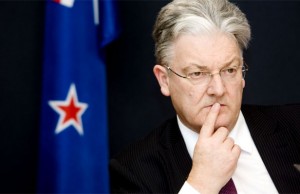 Peter Dunne, the “architect” of Psychoactive Substances Act, is now calling for the same regulatory approach to be applied to drugs currently scheduled in the Misuse of Drugs Act.

“People may be surprised to hear NORML agreeing with the former Minister of Health, who blocked cannabis law reform under the former Labour Government,” said Chris Fowlie, president of the National Organisation for the Reform of Marijuana Laws (NORML NZ Inc), “but he’s right that the evidence-based approach of the Psychoactive Substances Act should be applied to drugs currently scheduled in the Misuse of Drugs Act.”

“New Zealand’s approach to regulating Psychoactive Substances has rightly attracted admiration around the world. It is evidence-based and puts health and safety first. However it’s obvious there is only a market for synthetic substitutes because cannabis is illegal, and it’s not rational to allow synthetics to be sold while maintaining the world’s highest arrest rate for natural cannabis, which is the safer choice.

“NORML has long campaigned for a regulated taxable system for controlling cannabis and other low-risk drugs. More politicians should try Peter Dunne’s new way of thinking!”

A sure sign of looming danger is when a politician opines the eerie words, “I’ve been thinking.” It is usually a warning some new crackpot idea is about to be unleashed, or hobby horse indulged. In fact, politicians’ “thinking” lies at the heart of many of the problems we face today.

Now, of course there are exceptions to every rule. There have been occasions when politicians’ thinking has led to profound positive social and economic change, or times when the lofty aspirations outlined by a politician have inspired a nation or a generation. (Nelson Mandela’s struggle against apartheid is the obvious contemporary example.) But generally speaking these occasions are the exception rather than the rule.

So, against that background, and with a fair measure of trepidation, let me share some of my current thinking about a contentious issue.

Just over a couple of months ago, the Psychoactive Substances Act of which I was the principal architect was implemented. It provides for the first time for a regulated market for the sale and supply of psychoactive substances, based on the level of risk they pose to the user. It is attracting interest from around the globe, as an innovative solution to an international problem, and, after a few not unanticipated teething problems, seems to be settling down quite well.

Now, here is where I have been thinking. Although the Psychoactive Substances Act was intended to deal with that issue only, and not to have wider application, it does occur to me that, if after a period of time, it is shown to be working effectively, it could well become the model by which narcotic drugs, currently controlled under the Misuse of Drugs Act, are regulated for the future. The yardstick of level of risk – based on sound pharmacological and toxicological evidence – would become the determinant of availability, not public sentiment or prejudice.

I am not suggesting a revolution, but simply observing that the regulatory regime introduced for psychoactive substances could well have wider application and that we should not be averse to that possibility. After all, most experts now concede the so-called “war” on drugs has failed, and new initiatives are required.

So, is this another crackpot idea from a politician with time on his hands to be “thinking’? Or is an idea with merit worth considering further?

You be the judge.