Cannabis Referendum Bill deserves your Yes vote. Here’s what it does and how we can make it even better. 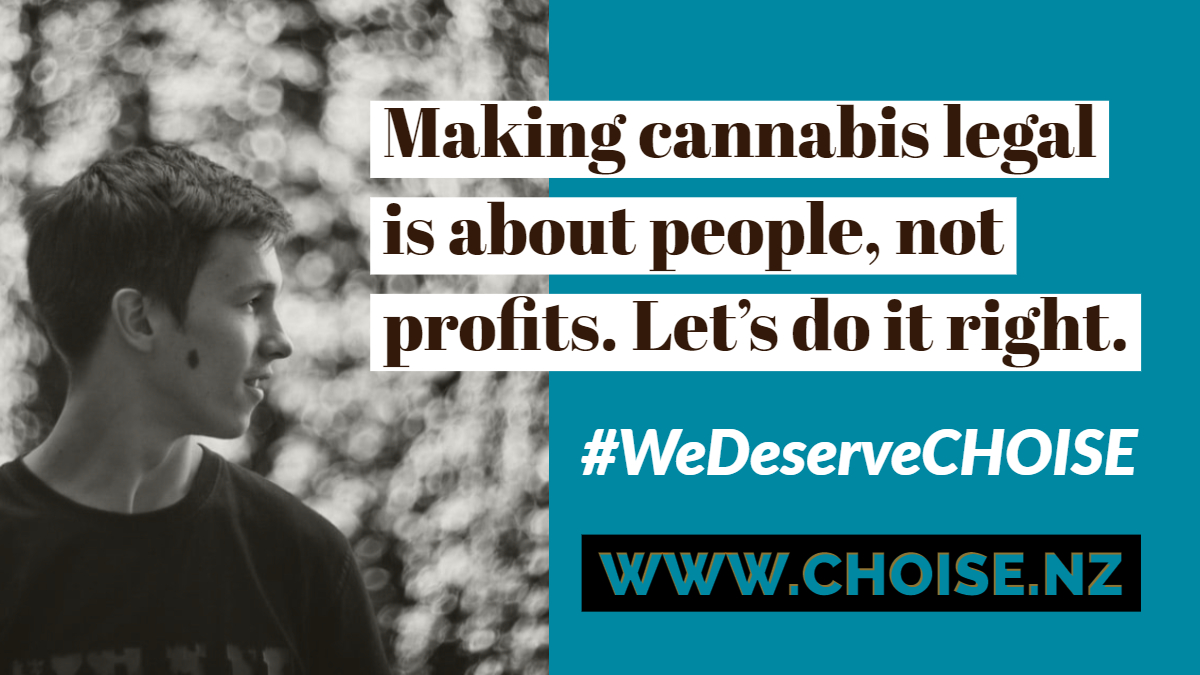 By Chris Fowlie. Originally published on The Daily Blog.

Yesterday the Government released their draft Bill for the cannabis referendum. There is plenty to like about it, even though it lacks some features I think would make the reforms more popular, and more likely to win the referendum.

The draft Bill was released late in the day at 3:30pm, to control the narrative by denying commentators any time to comment, and forcing journalists stuck in the 6pm news cycle to reprint the lines the Government had fed them. This can be seen in the breathless, rushed media coverage – including a press release from myself, which naturally concentrated on the stuff I was disappointed with.

Much of yesterday’s media coverage focused on the proposed limit of 14 grams for daily purchases and public possession, with speculation of “how many joints is that?” taking more column inches than the long list of good things the Bill would do. That’s hardly surprising, given those limits were put right at the beginning of the 65-page Bill.

Today, with more time to properly reflect, the coverage has been more nuanced, and we have confirmation the Government will flesh out the details – including social equity provisions – in a final version to be released in March or April 2020. Voters will have plenty of time to think about the Bill and make an informed decision before they vote at the general election.

Let’s be clear: this Bill deserves your Yes vote. It is world-leading and historic. No government anywhere has tried to do this. The draft Bill may not be perfect, and I have plenty of ideas for how to improve it, but we must not let perfect get in the way of better.

Anything would be better than what we have now. Even if the referendum Bill only allowed 1 gram and no homegrown, and forced us to consume in the toilet, it would still be better than the current law.

Let’s also be clear what a No vote means: not just the status quo which condemns so many people to criminal records and blighted their lives while handing the lucrative trade to organised crime; losing the referendum would probably result in an uptick in arrests, and no politician would touch cannabis reform for another twenty years. There is no half way; it’s Yes or nothing.

It’s also worth noting the referendum announcement came less than a week after a Horizon poll found a surge in support for the Yes vote; the latest Ministry of Health statistics showed a 26% jump in the number of people self-identifying as cannabis consumers (now 15% of adults aged 15+, up from 11% in 2017/18); and the US state of Michigan had their first legal cannabis sales under a new law that promotes social equity.

Here’s what the draft Bill will do:

It’s particularly heartening to see the focus on consumer safety, and that there will be a public education campaign in the lead up to the referendum. There is a lot to like, in fact, but also many areas that are still to be completed or could be made much better.

Here’s how to make this draft Bill better, and the ‘Reeferendum” more likely to pass:

I have previously called for a well-funded public education campaign ahead of the cannabis referendum, and a model based on social equity, social retail enterprises and social clubs.

The Bill has public consumption lounges like cafes, rather than members-only social clubs like RSAs. As much as I love the coffeeshops of Amsterdam and the dispensaries of North America, I think this is a mistake. To see why, we just have to look at the local reaction to legal high sales. Massive queues formed outside the most dodgy operators, media splashed them everywhere, and conservative middle-NZ revolted. The law was turfed out before the ink had even dried. Private cannabis social clubs in Uruguay and Spain, in contrast, are associated with more effective public health measures, lower visibility, and increased control, while still giving consumers a safe space to go.

The draft Bill doesn’t promote social enterprises over big corporates, although it still could. The licensing authority will be given the power to decide the types of people and businesses who should be favoured and how the market will be allocated. Rather than first in first served – favouring well capitalised Big Business – they could instead use a points-based licensing system (like Illinois) to fairly allocate licenses and market share to those who would most benefit their local communities, and to help right the wrongs by ensuring those who suffered most under the current law, such as Maori, are first in line. We should do all we can to encourage local and craft growers over booze-owned foreign corporates.

It doesn’t do much for increasing opportunity. It doesn’t expunge cannabis criminal records, but it does leave the door slightly open for those criminalised under the current law. The schedule that defines who cannot hold a licence is pointedly empty, implying it won’t just be a blanket ban on anyone with drug convictions like now. Instead, we may see bans put on those with convictions for violence, fraud and major drug crimes, for example, while letting those who have minor pot convictions enter the legal industry. That’s really important if we want those on the illicit side to go legal. Reforms overseas have gone further, setting aside funds to help low socioeconomic applicants with low-interest loans and reduced fees.

The draft bill says the licensing authority will take social equity into account, but doesn’t yet spell out what that means. I’m told this is because officials haven’t had time to properly consider it, but that they have heard this message “loud and clear”, from me and many others, so I remain hopeful.

The proposed age limit of 20 for purchase and use will condemn 18- and 19-year-olds to source cannabis illicitly from those prepared to operate outside the law, or choose the more harmful legal alternative of alcohol. We should make it consistent with the legal age for alcohol purchase and use.

Don’t allow edibles that resemble candy or would otherwise appeal to children. I’ve previously said it’s important the public don’t base their vote on hysteria about evil gummy bears. Banning them is a “no brainer”. Allowing gummies or candy just hands more ammunition to the anti-cannabis brigade.

The limits on home growing and public possession should be lifted and should instead focus on commercial intent. As an adult you can brew as much booze as you want, just don’t sell any. Drink yourself stupid, just don’t give any to kids. Put heavy penalties in place to ensure these rules are followed. Picking arbitrary numbers could see people busted simply for having a gram or two extra. Catching otherwise-law abiding adults in the ‘grey zone’ shouldn’t be the point of legalisation. It’s great that minor infractions will be civil penalty like a speeding ticket, but a concern that growing more than 10 plants would still be a criminal, imprisonable, offence.

It will be difficult for many regular cannabis consumers to be self sufficient by growing only 2 plants. They could attempt to grow the biggest plants you’ve ever seen. The 14 gram limit seems arbitrary but it is important that rural folk or anyone living miles from their nearest licensed store can stock up for the week and get home without breaking the law. If it was less, they would have to travel more often, and there would be more queues outside stores. We want to avoid that.

Home delivery and mail order sites should be part of this scheme. In Canada they let licensed producers sell direct to consumers through a Government-run internet site that tracks consumption and provides data on the effectiveness of their scheme. We should be collecting as much data as possible. The draft Bill signals a desire to do this but does not show how.

Focus on overall harm, not total production or market size. This has been inserted to comply with international drug treaties, which compel a reduction in total cannabis use, and to also make the Bill more palatable to conservative middle NZ. But our focus should be on overall harm, not the number of joints that might be consumed. If people use cannabis in less harmful ways, even if use goes up, that’s a win. If people switch from alcohol to cannabis, which is demonstrably safer, that’s also a win. But if licenses come with conditions that they will reduce over time, that’s a win for illicit providers and organised crime.

Tax based on net THC, with a credit given for CBD content. CBD is known to ameliorate the negative effects some people experience with high-THC concentrations, so we should be encouraging it with policy settings such as this. The draft Bill proposes a sales levy rather than a tax, which is great, but doesn’t give much detail yet. I’ve been pushing for a levy because they can be directed to specified areas instead of disappearing into the general tax take. Cannabis sales levies should be directed to all sorts of worthwhile causes including our underfunded health and education sectors, law enforcement, researchers, data collection, and providing the social equity aspects of the reforms.

Overall the draft Bill scores enough to deserve your Yes vote, and I’m sure it will be made even better in the final version. Although this draft has missed several opportunities to build in measures that would make cannabis reform benefit everyone, the opportunity is still there. The final version will be released in March or April 2020, and MPs will be your conduit to giving feedback and suggestions.

I have previously written to Justice Minister Andrew Little about a model based on social equity, social enterprises and social clubs, which I think could be what it takes to win the cannabis referendum. In consultation with a wide variety of stakeholders, I designed the Cannabis & Hemp Opportunity, Investment and Social Equity (CHOISE) model and have spent the last few months promoting it.

At a policy workshop held recently in Wellington, organised by Massey University, the CHOISE model unofficially came out top in an analysis of several different models. I wasn’t surprised, because I designed the CHOISE model to create the most public good while causing the least harm.

People everywhere tell me they want a law for the people, not just profits. The draft bill released today goes part way there. I hope they incorporate some CHOISE aspects when filling in the details, and with your help, they might do just what it takes to win the cannabis referendum.

Chris Fowlie is the CEO of Zeacann Limited, a medicinal cannabis producer; co-founder of the New Zealand Medical Cannabis Council; president of the National Organisation for the Reform of Marijuana Laws NZ Inc; co-founder of The Hempstore Aotearoa; resident expert for Marijuana Media on 95bFM; blogger for The Daily Blog, and court-recognised independent expert witness for cannabis. The opinions expressed here are his own.