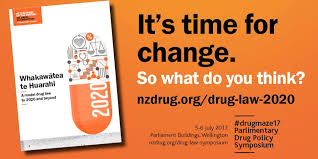 This page is reproduced from the New Zealand Drug Foundation, 13 Sept 2019: “Taking control of cannabis”

We need to be ready with a draft law that will protect young people, take money from the hands of the black market and put that towards healthcare instead.”

At next year’s election, voters will be offered the simple choice of saying “Yes” to responsible public health regulations or to leaving control of cannabis in the hands of organised crime groups.

If you’re like me, you’d prefer that your kids never use cannabis. But you’ll also be aware there is a good chance they will at some point. Despite it being illegal – and perhaps partly because of it – around half of all New Zealanders do.

I want the best for my kids as they get older and the same for all young New Zealanders. If they do decide to use cannabis when they are older, I would much rather they didn’t buy it from organised crime, who might also sell them synnies or meth. I’d rather they bought from government-regulated stores where products are packaged in single-serve portions with maximum potency levels and health warnings on every packet. I want them to have their ID checked at the door and be turned away if they are under 20.

I want a world in which cannabis looks as boring as possible and where the proceeds from taxes go straight back into healthcare and treatment rather than funding the lifestyles of organised crime. That’s the responsible way to protect young people and help those who struggle with their drug use.

Download Taking control of cannabis: A model for responsible regulation

We all want a happier, healthier, more equal New Zealand.

For us, that means treating cannabis use as a health and social issue, not a criminal one.

Most people who use cannabis do so without harm to themselves or others. But for some, cannabis can have a serious negative impact on their lives. Those people, and their families, are the ones who deserve our focus. They have been failed by prohibition.

Control of cannabis has been left to organised crime to regulate – and the black market has not done a good job of protecting our health interests. We’d like to see the Government take over this management role, because we think they’ll be a more responsible pair of hands.

At the general election in 2020, we’ll all get to vote on whether cannabis should be legalised and regulated. We’ll be voting on whether a draft Bill to regulate cannabis should go through Parliament and become law, or not. That Bill is being drafted now.

If New Zealanders vote to legalise cannabis, we need to be ready with a draft law that will protect young people, take money from the hands of organised crime, and put that towards healthcare instead. The Government is going about it the right way. They have already released a framework that focuses on improving health outcomes and protecting young people. Taking control of cannabis provides our overview of their proposals, and discusses key areas we recommend be included as they draft the Bill.

Download Taking control of cannabis: A model for responsible regulation