Join our call for a moratorium on further arrests, as we commemorate the ninetieth anniversary of cannabis prohibition, this Armistice Day Saturday 11 November 2017. 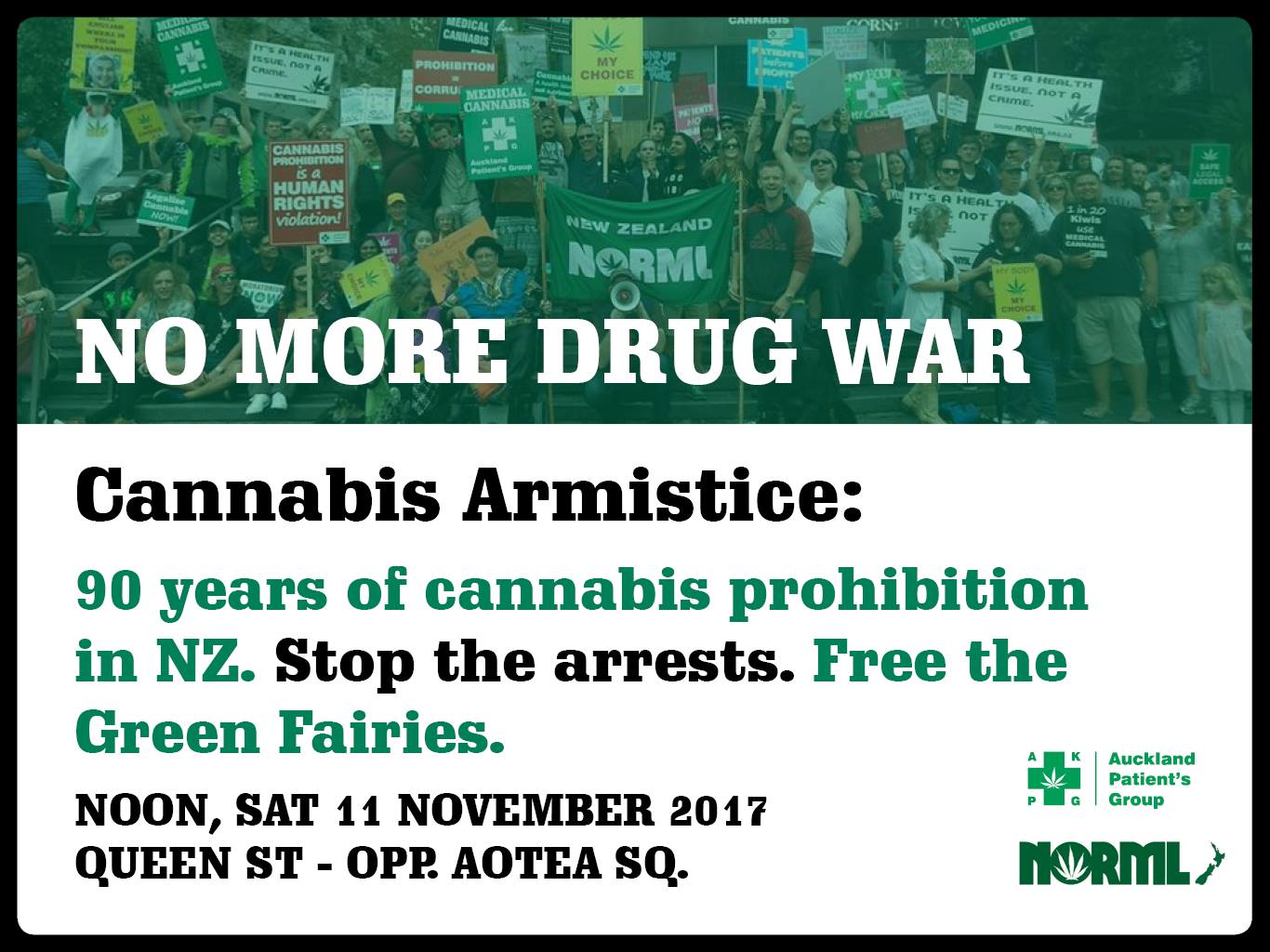 Saturday 11th November 2017 marks ninety years of cannabis Prohibition in New Zealand, with the passage of the Dangerous Drugs Act on that day in 1927.

That law was designed to stamp out access to medical cannabis as well as hemp and all adult use. It was the start of our War on Drugs. Since then hundreds of thousands of people have been arrested and imprisoned for cannabis charges in New Zealand. We have one of the highest arrest rates in the world.

The new Labour-led Government will introduce legislation by February 2018 to legalise medical cannabis, and will hold a referendum to legalise personal use, at or by the next election in 2020.

But Police are still prosecuting several ‘Green Fairies’, accused of providing medical cannabis to patients who need it.

They are continuing to prosecute even after learning the compassionate medical circumstances, and despite the Law Commission calling for the police to have a compassionate scheme and exercise their discretion for medical cannabis.

Join our call for a moratorium on further arrests, as we commemorate the ninetieth anniversary of cannabis prohibition, this Armistice Day Saturday 11 November 2017.

* At the cenotaph and parliament district, Bowen Street
* 11am moment of silence
* 12 noon relocate to parliament grounds

* Trafalgar St opposite Farmers
* 11am to 2pm

Saturday 11th November 2017 marks ninety years of cannabis Prohibition in New Zealand, with the passage of the Dangerous Drugs Act on that day in 1927.

That law was designed to stamp out access to medical cannabis, as well as industrial hemp and all adult use. It was the start of our very own War on Drugs, and we beat the USA by ten years.

The origins of our drug war were, of course, racist. Our very first drug law banned the use of alcohol by Maori. Pakeha were still allowed to sell it to them, and did. Like other drug laws that followed, this was used to harass and oppress a minority population.

Our second drug law banned the use of Opium by Chinese people. Anyone else could still use it.

Our third drug law, the Dangerous Drugs Act 1927, banned Opium for everyone – as well as cannabis – but retained a warrantless search provision if the suspect was of Chinese descent.

Our fourth drug law, the Narcotics Act 1965 distinguished between dealing and possession, but still saw people jailed for a single joint. With the rise of the counterculture, this was untenable, and calls for further reform gathered pace.

Our fifth drug law, the Misuse of Drugs Act 1975, remains in force today. It came at a time of worldwide drug law reform, including the decriminalisation of cannabis in ten of the United States.

The 1972-3 Blake-Palmer committee that recommended the new law said the prohibition of cannabis “should remain only so long as it was seen to be largely effective”, and advocated a review within ten years.

However while the 1975 law created new categories with lower penalties for lower-risk drugs such as cannabis, it also gave Police extensive search powers and emboldened them to ratchet up cannabis arrests to their highest ever levels.

Police have long been overzealous in their enforcement of our drug laws. Despite have the discretion to decide themselves whether an arrest is in the public interest, we now have one of the highest arrest rates in the world. Maori are over-represented in rates of arrest, prosecution, conviction and imprisonment.

Over the past nine decades hundreds of thousands of New Zealanders have been arrested and imprisoned for cannabis charges. I’ve previously written about our high rate of cannabis arrests here on The Daily Blog, quoting figures from Statistics NZ website for cannabis apprehensions since 1994, or half of the 42 years the Misuse of Drugs Act has been in force:

While police arrest fewer people for cannabis these days than they did ten years ago, this year they will still aim to busting over ten thousand cannabis consumers and providers, maintaining New Zealand’s dubious record of having one of the highest cannabis arrests rates in the world. Our police choose to waste the equivalent of over 150 full time police officers spent chasing and prosecuting people for small amounts of cannabis.

The review of the Misuse of Drugs Act promised in the early 70’s finally took place in 2010. The Law Commission recommended the antiquated Act be scrapped and replaced with a new law fit for purpose.

They recommended a new law that would allow the regulated availability of low risk substances, provide for warnings rather than arrests for cannabis possession, legalise social dealing, and repeal the ban on harm-reducing drug utensils.

The previous National Government cherry-picked some recommendations they liked – such as regulating the sale of synthetic psychoactive substances – and unofficially rejected all the rest.

Labour have said they will implement the Law Commission’s report.

The failure of the current law is clear. Despite their enthusiasm for arresting cannabis users, half our population have now tried cannabis. The law is not an effective deterrent.

It also brings the rule of law into disrepute, with a sizeable majority now supporting cannabis law reform. This is especially true of safe legal access to medical cannabis, which attracts almost 90% support in opinion polls.

The Government’s own research confirms that 42% of all cannabis users are medical patients (ie, they use it for health benefits). This means that one in twenty New Zealanders use cannabis for medical purposes.

Prior to 1927, the annual practical pharmacy exam asked students to prepare dispensary prescriptions for cannabis. Since 1927, thousands of patients who use cannabis medicinally have been denied effective relief, or have been prosecuted and even imprisoned for their medicine.

This includes several ‘Green Fairies’, such as Rose Renton, who are accused of providing medical cannabis to patients who need it.

Police are continuing to prosecute them even after learning the compassionate medical circumstances, and despite the Law Commission calling for the police to have a compassionate scheme and exercise their discretion for medical cannabis.

Busting Green Fairies also means patients are denied the medicine they need. Supplies are already scarce and many patients find it difficult or impossible to obtain, or too expensive to afford. As Newshub reported:

As many as 2000 terminally ill patients, amputees and cancer sufferers have been forced to go without their cannabis-based pain relief after two police busts involving so-called ‘green fairies’.

NORML has lead calls for cannabis law reform since our founding in New Zealand in 1980. This year together with our friends in the cannabis law reform community including Auckland Patients Group, Joint Action, The Hemp Foundation, It’s Medicine and others, we have helped organise multiple rallies across New Zealand calling for safe legal access medical cannabis, while our slow-burning ‘whispering campaign’ helped generate awareness and laid the foundation to make cannabis an election issue.

True to our prediction of “Jacinda over Bill”, the new Labour-led Government has put hope on the horizon. They will introduce legislation by February 2018 to legalise medical cannabis, and will hold a referendum to legalise personal use, at or by the next election in 2020.

But the referendum and any subsequent law change may take 5 years: in that time 50,000 Kiwis may be arrested for cannabis, at a cost of $1.5 billion, and existing prosecutions for cannabis such as those against the Green Fairies will continue.

This is simply not good enough. Changes so far have been too slow and not enough to make any practical difference.

We support the New Zealand Drug Foundation in calling for immediate law change.

We also want to show that we do support the new direction taken by the new Government – we just want it to happen quicker.

And we want to demonstrate support for the Green Fairies, some of whom appear in court over the following week (there will be court house rallies on Tuesday 14th November in Nelson, Christchurch and other centres).

If you intend to use cannabis, or care about someone who does, join our call for an immediate moratorium on arrests while we have the “Reefer-endum”.

Show up to demonstrate your support for cannabis law reform, on the ninetieth anniversary of cannabis prohibition, this Armistice Day Saturday 11 November 2017.