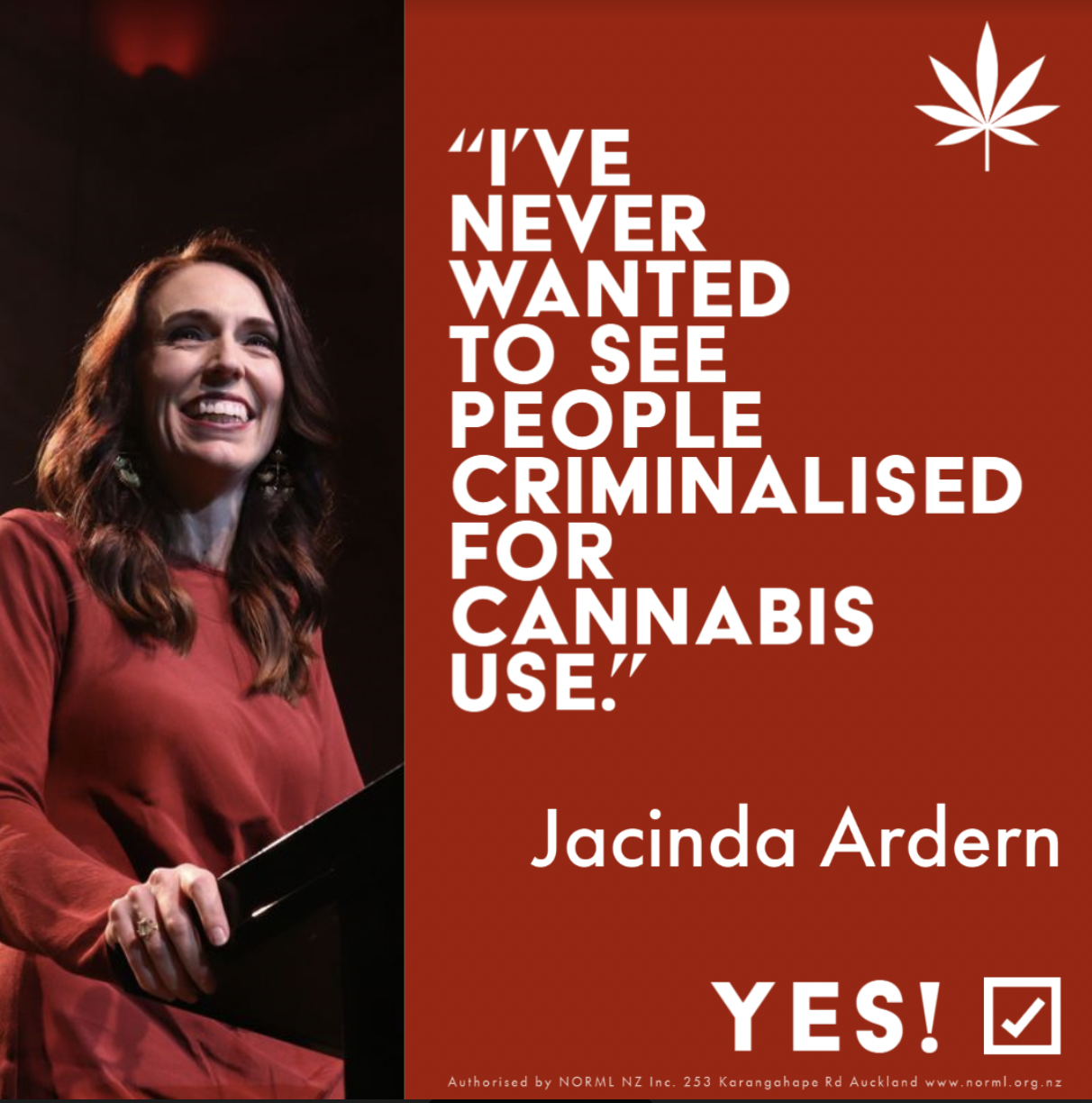 By Chris Fowlie – Originally published on The Daily Blog, October 11, 2022

While Americans convicted for possessing pot will soon be pardoned, some local politicians have already stubbed out the roach here, citing the 2020 cannabis referendum result. Yet there remains a need to pardon Kiwis for something most of us no longer believe should be a crime, and there are several ways we could do it, writes CHRIS FOWLIE.

Sign the petition to Pardon cannabis offences and decriminalise cannabis

As part of a three-point plan, US President Joe Biden announced an immediate and full pardon for everyone in the US federally convicted of “simple possession” of marijuana.

“Sending people to jail for possessing marijuana has upended too many lives — for conduct that is legal in many states. That’s before you address the clear racial disparities around prosecution and conviction. Today, we begin to right these wrongs,” Biden tweeted.

In addition to the pardon of all prior federal convictions, Biden also implored state legislatures and Governors to do the same thing – and that clear signal encouraging local reforms will have a huge impact for millions of Americans carrying state- and county-level convictions for pot.

The biggest impact could be the third point, which got the fewest headlines: Biden announced plans to review the scheduling of cannabis, which is currently lumped in with Heroin as having “no medical value” and the toughest of sanctions.

Rescheduling cannabis would reduce or potentially eliminate penalties and would help remove blockages to research. Of note, the review does not rule out fully descheduling cannabis, or removing it entirely from the Controlled Substances Act, and leaving states to make their own rules.

Statistics from NZ’s Ministry of Justice, quoted by One News, show that between 1980 and 2022 more than 100,000 people have been convicted of cannabis possession and/or use in New Zealand.

The burden of these convictions is not shared evenly. Cannabis is used by people of all walks of life, but the well off and elite have typically avoided police attention and gotten better treatment if they are caught.

On the other hand, according to a recent report by the Prime Minister’s chief science adviser Juliet Gerrard, Māori are three times more likely to be arrested and convicted for cannabis than non-Māori, even after accounting for higher rates of use.

But while welcoming the US move, Justice Minister Kiri Allen said New Zealand’s current laws are “fit for purpose” and the Government is sticking by its pledge to follow the referendum result.

Mōrena @jacindaardern. Even the most ardent opposition to cannabis legalisation through the referendum argued it shouldn’t be a criminal offence. #LetsDoThis. https://t.co/BV02SIwrcF

Green MP Chlöe Swarbrick said “Even the most ardent opposition to cannabis legalisation argued it shouldn’t be a criminal offence. Now even the birthplace of the “War on Drugs” is admitting they’ve failed.”

Health Minister Andrew Little, former Overseer of the Referendum then tweeted, as an excuse for further inaction. a condescending lesson on New Zealand’s constitutional arrangements.

We don’t have the sort of executive powers that POTUS has. Under our system of government ministers do not interfere in judicial decision-making. Parliament passes laws which judges apply. Parliament has signalled its expectations for how Police exercise charging discretion.

“We don’t have the sort of executive powers that POTUS [President of the United States] has. Under our system of government ministers do not interfere in judicial decision-making. Parliament passes laws which judges apply.”

Well, that’s the point: Parliament has indeed passed laws criminalising hundreds of thousands of people, which the courts are applying and will continue to apply until Parliament does something to change that.

National’s Justice spokesperson Paul Goldsmith tried to end the discussion about pardoning pot convicts by saying cannabis legalisation should be “off the table” because of the referendum result.

ACT’s David Seymour said he voted Yes in the referendum but he’s against pardoning New Zealanders “for something that is still illegal”.

But as Swarbrick said, the “highly specific” referendum’s narrow result (50.7 percent in opposition) should not rule out all progress, especially when even hardened campaigners for Nope admitted people should not be criminalised for using cannabis.

Why, oh Lorde, is Chlöe still the only one making any sense?

In the wake of the cannabis referendum, Labour pinned itself to doing nothing. Yet a very narrow vote on a specific piece of legislation should not be an excuse for inaction, for evermore.

The 2019 amendment to the Misuse of Drugs Act. which reminded police of their discretion to not prosecute use and possession “unless it is required in the public interest”. has resulted in much a lower number of arrests. Credit for that.

However, disparities remain including racist enforcement and a geographical bias which sees Aucklanders arrested for cannabis possession at ten times the rate of Southlanders.

Local researchers found that for Māori, “there was no reduction in the number of cannabis charges before vs. after the amendment to cannabis laws”. Recent police research also found Māori are still over-represented in cannabis charges despite the 2019 law change giving police discretion over drug-related arrests.

In the New Zealand context, cannabis pardons should cover more than just “simple possession”. People may be convicted underSection 7 of the Misuse of Drugs Act for procuring cannabis, and/or possession, and/or consuming it, smoking it, or otherwise using it. Pardon the lot.

The pardon should also include convictions for cannabis utensils, which carry a heavier sentence and are often recorded on criminal records as “possession of a needle or syringe” – further blighting people’s records and employment prospects.

There are several legal pathways to action a pot pardon.

The Royal prerogative of mercy could be applied to individual cases, or classes of cases (for example, everyone convicted of possession or use of cannabis and/or a cannabis utensil).

In practise the Governor General acts on the instructions not of the King but of the Government of the day. Cabinet could write to the GG asking them to do this, and with a stroke of their golden pen – voila! –  It is done.

Legislation could be introduced directing the Ministry of Justice to wipe their records of convictions for possession of cannabis. It could be a Government Bill or a Member’s Bill.

This has been done before. People with convictions for homosexuality are now able to apply to have them wiped. Parliament has also passed legislation to pardon soldiers executed in the Great War.

But cannabis is still illegal, so that wouldn’t help those yet to be convicted in future. A simple fix would be to amend the Misuse of Drugs Act section 7 to specify that offences against it (use and possession etc) shall not be recorded as criminal convictions.

A third legislative method would be to amend the Clean Slate Act so that it applies immediately to any convictions for use or possession of cannabis, rather than the usual 7 years of good behaviour and other criteria.

The Government could take a leaf from Biden’s book and devolve cannabis law enforcement to a local level. The votes from the cannabis referendum show some areas are more than ready for legalisation, while others have more support for keeping the law the same.

We already have local laws for alcohol. Several regions have voted to retain licensing trusts, and the sale and supply of liquor is quite different in those places. Local Councils have their own Local Alcohol Policies, and Local Approved Product Policies for psychoactive substances.

Aucklanders have their own unique Council structure, an Auckland-only fuel tax, and some may recall when the Auckland Traffic Police performed local enforcement.

So, Auckland Mayor Wayne Brown, I’m looking at you! This is exactly the sort of thing you can do if you want to. Pressure central government for local de jure laws such as the above, or de facto approaches using non-legislative methods.

Local government could negotiate Memorandums of Understanding with their Police district about how they will operate. Such MOUs could detail the priorities expected by that local area (ranking cannabis way down the list), how police are expected to behave, and what it means to serve the public interest in that area.

They could specify that the public interest is not met by searching anyone for cannabis, nor raiding their home for it, nor responding to growing small amounts at home, nor proceeding with any prosecution for personal amounts.

This could become a de facto decriminalisation in areas which showed strong majorities for Yes in the cannabis referendum: the main urban centres, West Auckland, Northland, East Cape, Nelson and the West Coast.

The Māori electorates also all showed strong support for legalisation in the referendum. Could changes to cannabis law enforcement be part of Te Tiriti redresses?

Herbal cannabis is currently C1 – the toughest of the Class C subcategories, which come with special police search powers, and restrictions on medical use.

Concentrates made from cannabis, which may include dabs or hash but also cookies and vape cartridges, are classed as B1 which absurdly lumps it in with amphetamine and 25B-NBOMe. Again, B1 comes with tougher restrictions and more police powers.

Rescheduling would mean moving cannabis to lower levels in each class. It would make medical access easier and help curb search powers used to harass and detain tamariki.

It could even mean bringing back the defunct Class D for restricted substances, introduced by Helen Clark’s government but repealed under Key.

Rescheduling is not legalisation or decriminalisation, so even the most miserly interpretation of the cannabis referendum result, say, that taken by Andrew Little, would not be broken by doing this most meagre of moves.

Together with pardoning our cannabis convicts, and being open to local marijuana law reform, descheduling would have a huge impact on New Zealand’s half million regular users, two million canna-curious, and the 100,000 still carrying criminal records for something many of us believe should no longer be a crime.

For parliamentarians considering their legacy, this could be it.

Sign the petition to Pardon cannabis offences and decriminalise cannabis